The Rijksmuseum, Amsterdam, the Netherlands

The Rijksmuseum, or “State Museum,” is one of the most popular and highly regarded art museums of the world. It holds an outstanding collection of art, including masterpieces of Dutch art by Rembrandt and Vermeer. The collections are housed in an impressive building from 1885, designed by Dutch architect Pierre J.H. Cuypers, in the then-fashionable Dutch neo-Renaissance style, with elements of neo-Gothic.

The Rijksmuseum reopened in 2013 after ten years of renovation and restoration, to bring the building back to its former glory and take it into the 21st century. Spanish architects Cruz and Ortiz designed the restoration. After removing the many decades of additions and changes within each courtyard and the various galleries, the architects created a continuous plaza below ground for the museum, and kept a public passageway above so pedestrians and cyclists can easily pass through the building. The new design combines the grandeur that defines the Rijksmuseum, plus facilities such as an auditorium, museum café, a shop and, to preserve the art, climate-control and security features necessary for today’s requirements.

Past Pritzker Architecture Prize ceremonies have been held at France’s Palace of Versailles and Grand Trianon, Todai- ji Buddhist Temple in Japan, Prague Castle in The Czech Republic, the White House in Washington, D.C., and Beijing’s Great Hall of the People. Some of the most beautiful museums in the United States have hosted the event, from Chicago’s Art Institute to New York’s Metropolitan Museum of Art and Fort Worth’s Kimbell Art Museum. 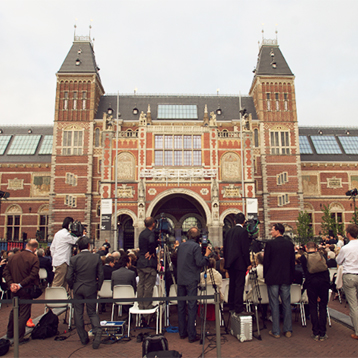