Todai-ji, or Eastern Great Temple, a Buddhist temple complex in the city of Nara, Japan, was originally founded in the year 743. At that time, Buddhism was at its height and served as a state religion. The best-known statue at Todai-ji Temple is Buddha Vairocana, known in Japanese as Daibutsu. It is a giant gilded statue 49 feet tall. It was originally housed in an all-wood building, the Daibutsu-den, 157 feet in height, reputedly the largest wooden building in the world of its time. The statue has been recast several times since for various reasons including earthquake damage, and the temple rebuilt twice after fire. The current building, finished in 1709 although immense, is about thirty percent smaller than its predecessor. The temple is a listed UNESCO World Heritage site as "Historic Monuments of Ancient Nara," together with seven other sites including temples, shrines, and places in the city of Nara.

Also built around the middle of the eighth century at Todai-ji, the original Shosoin, which is an architectural treasure in itself, served as the repository for the temple treasure. It is made in the Azekura style, a log-house construction that is often seen in old storehouses: the walls, intersecting at corners, are built up of hewn logs laid horizontally on top of each other. Shosoin safeguarded a heritage of around 9,000 different objects that date back to the seventh and eighth centuries along with numerous works from overseas, especially from Persia, China, and Korea. 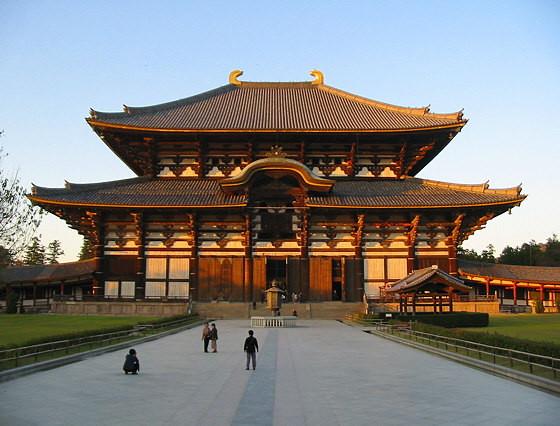