James Stirling (1926-1992), of Great Britain is considered by many as the premier architect of his generation, an unparalleled innovator in postwar international architecture. Stirling was born in Glasgow in 1926. He was educated at the University of Liverpool School of Architecture and began his own practice in partnership with James Gowan in London in 1956. Over a seven-year period they designed some of the most significant projects of the time, most notably the garden apartments at Ham Common (1955-58), the seminal Engineering Building at Leicester University (1959-63), and the Cambridge University History Building (1964-67).

In 1971, Stirling began to work in association with Michael Wilford. From this point on, the scale and number of his projects broadened to include museums, galleries, libraries and theaters. Since 1980, he has completed a major social sciences center in Berlin; a Performing Arts Center for Cornell University; and such major museum projects as the Clore Gallery expansion for the Tate Gallery in London; the Arthur M. Sackler Museum, an addition to Harvard's Fogg Museum; and the competition winning design for the Neue Staatsgalerie in Stuttgart, Germany.

In an article written in 1979 for the book, Contemporary Architects, Stirling said, "I believe that the shapes of a building should indicate—perhaps display—the usage and way of life of its occupants, and it is therefore likely to be rich and varied in appearance, and its expression is unlikely to be simple ... in a building we did at Oxford some years ago (the Florey Building, Queen’s College, Oxford, 1971), it was intended that you could recognize the historic elements of courtyard, entrance gate towers, cloisters; also a central object replacing the traditional fountain or statue of the college founder. In this way we hoped that students and public would not be disassociated from their cultural past. The particular way in which functional-symbolic elements are put together may be the ‘art’ in the architecture. ...If the expression of functional-symbolic forms and familiar elements is foremost, the expression of structure will be secondary, and if structure shows, it is not in my opinion, the engineering which counts, but the way in which the building is put together that is important."

James Stirling was awarded the Alvar Aalto Medal in 1977, the RIBA Gold Medal in 1980 and the Pritzker Prize in 1981. In addition to teaching in Europe, he served as the Charles Davenport Professor at Yale University from 1967. 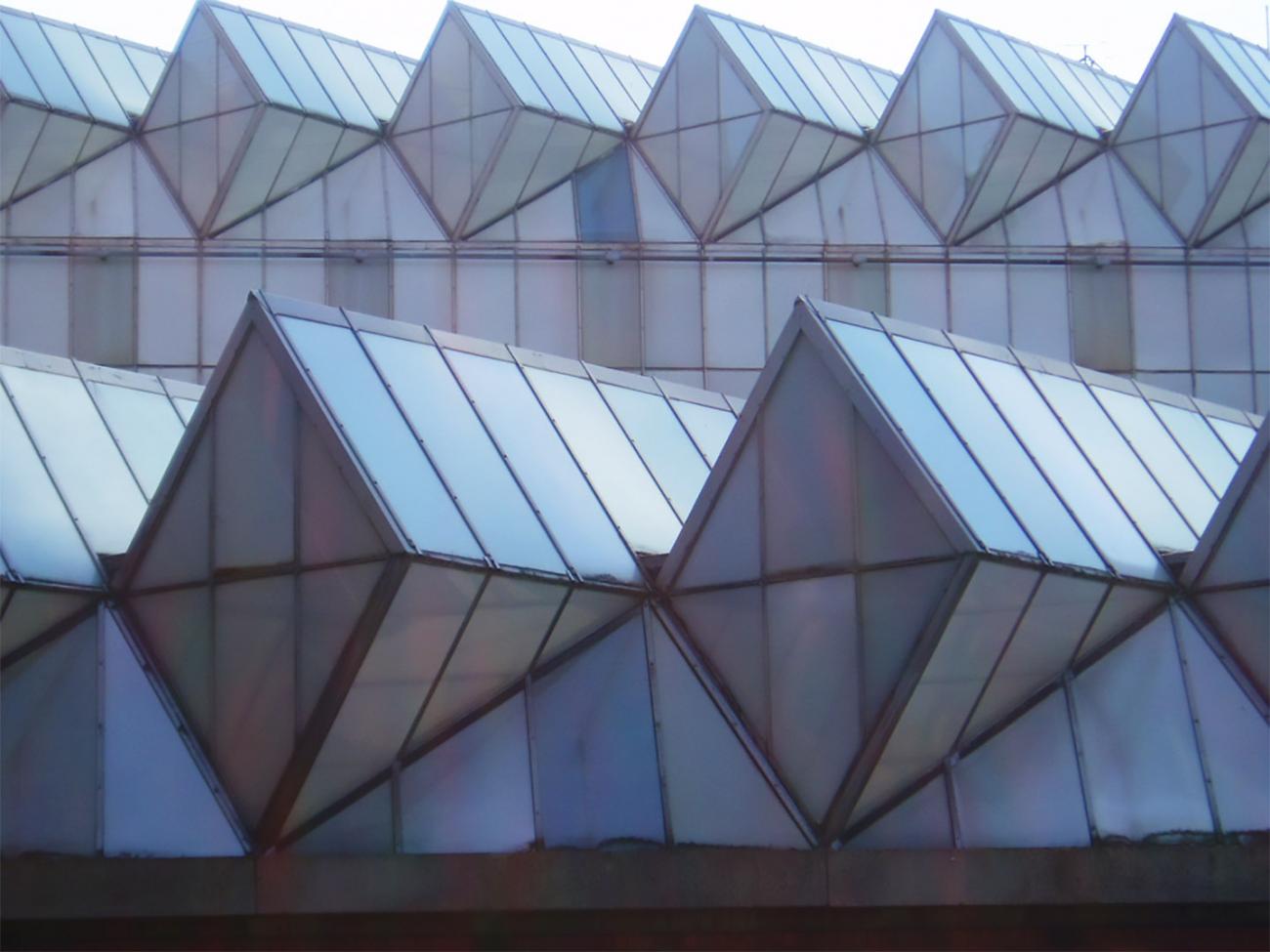 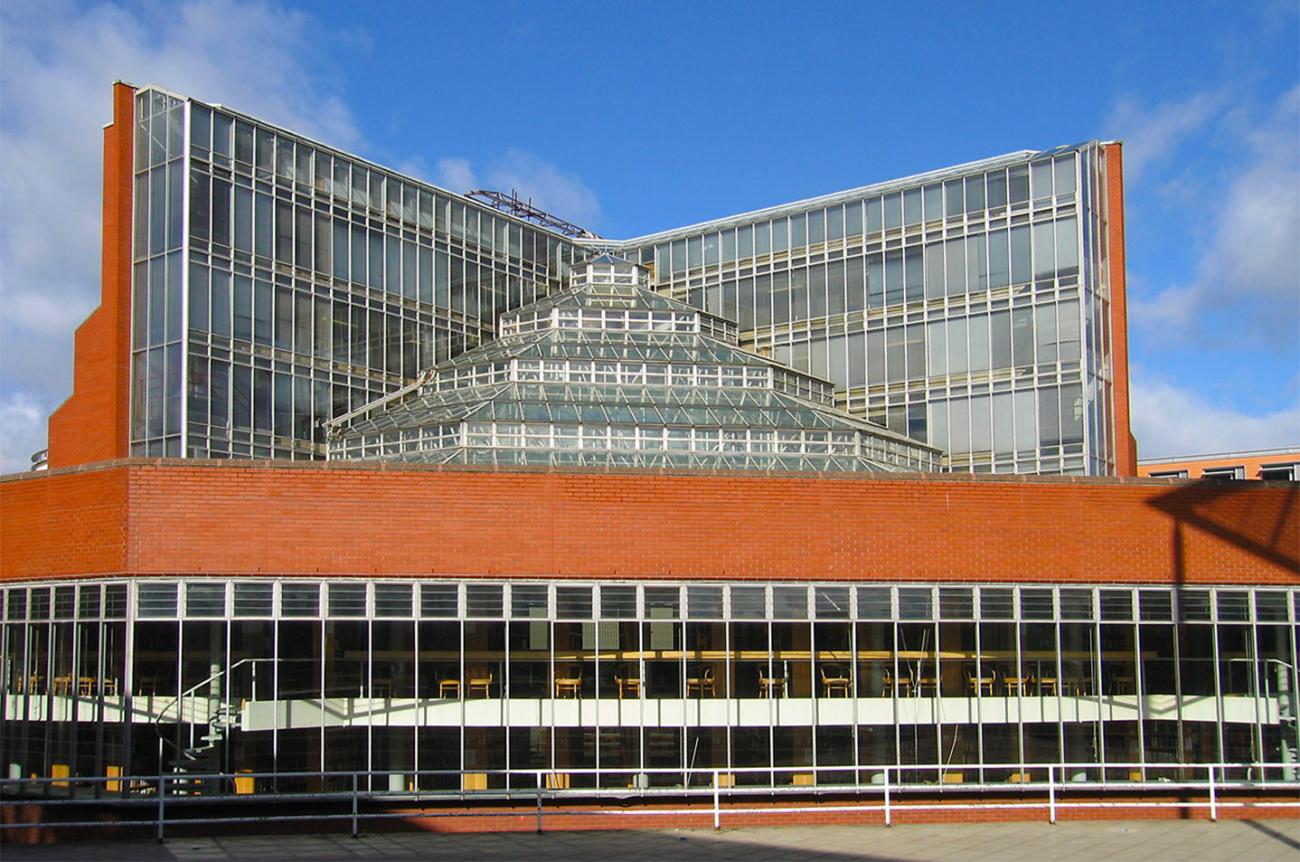 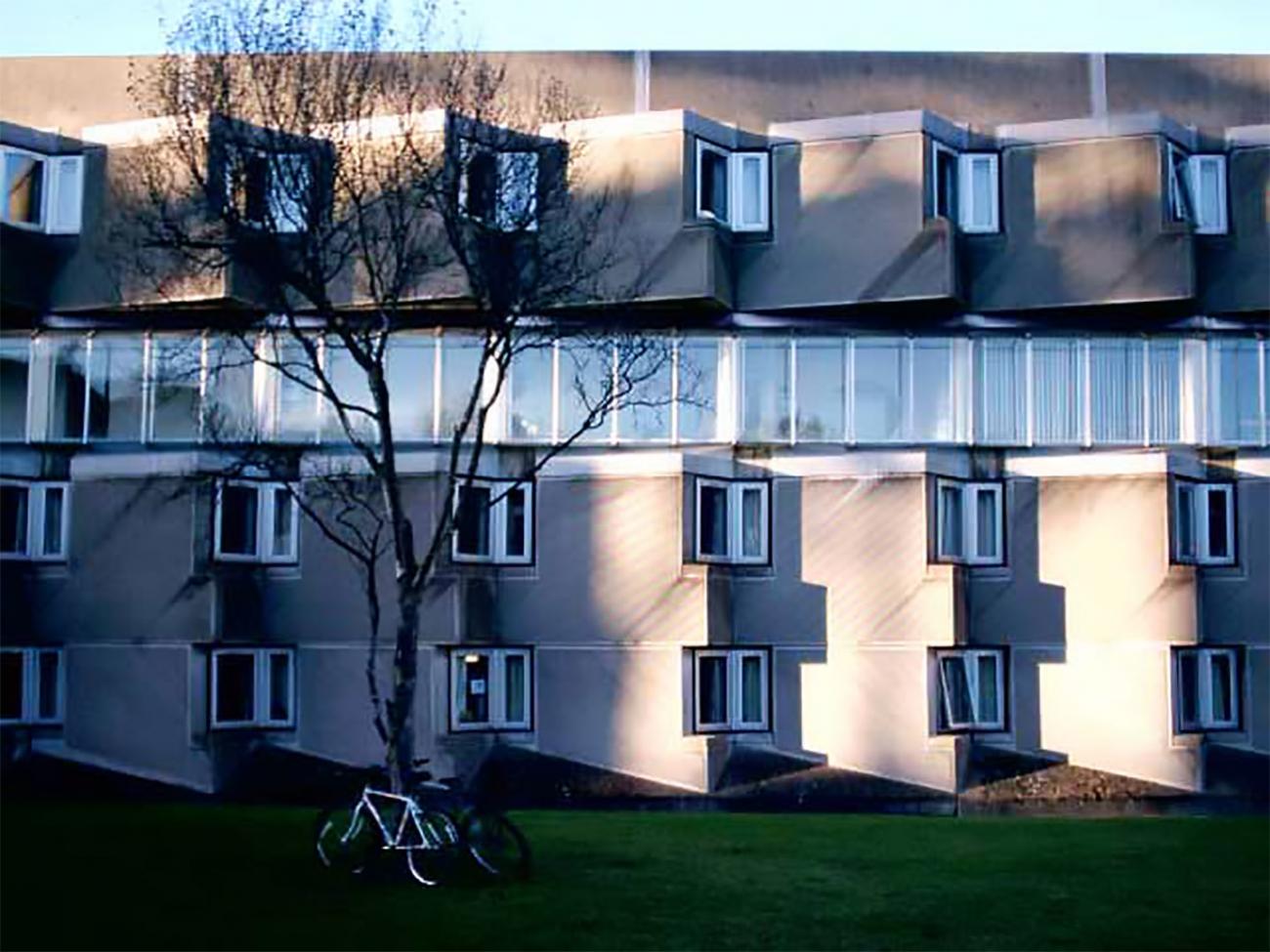 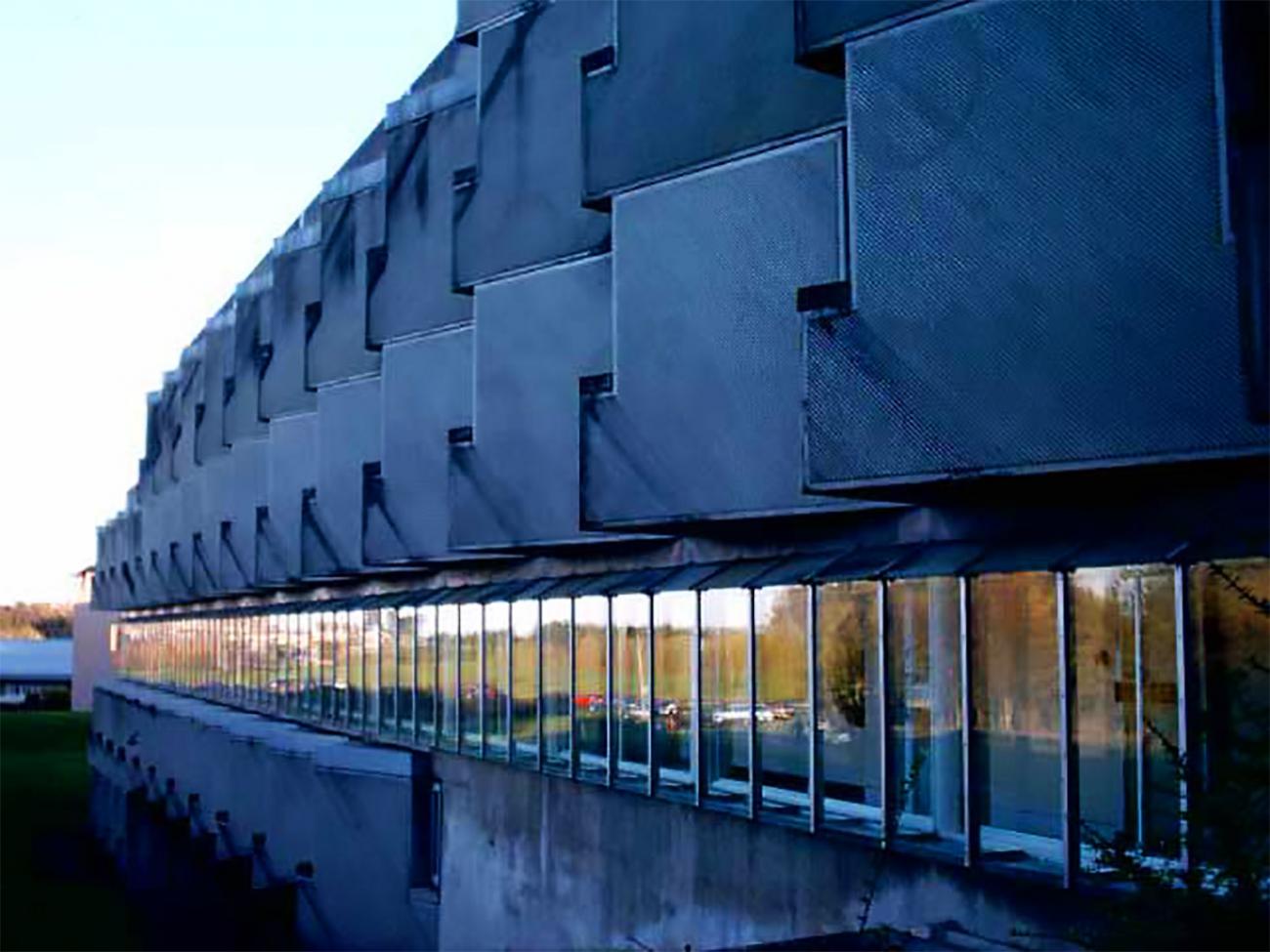 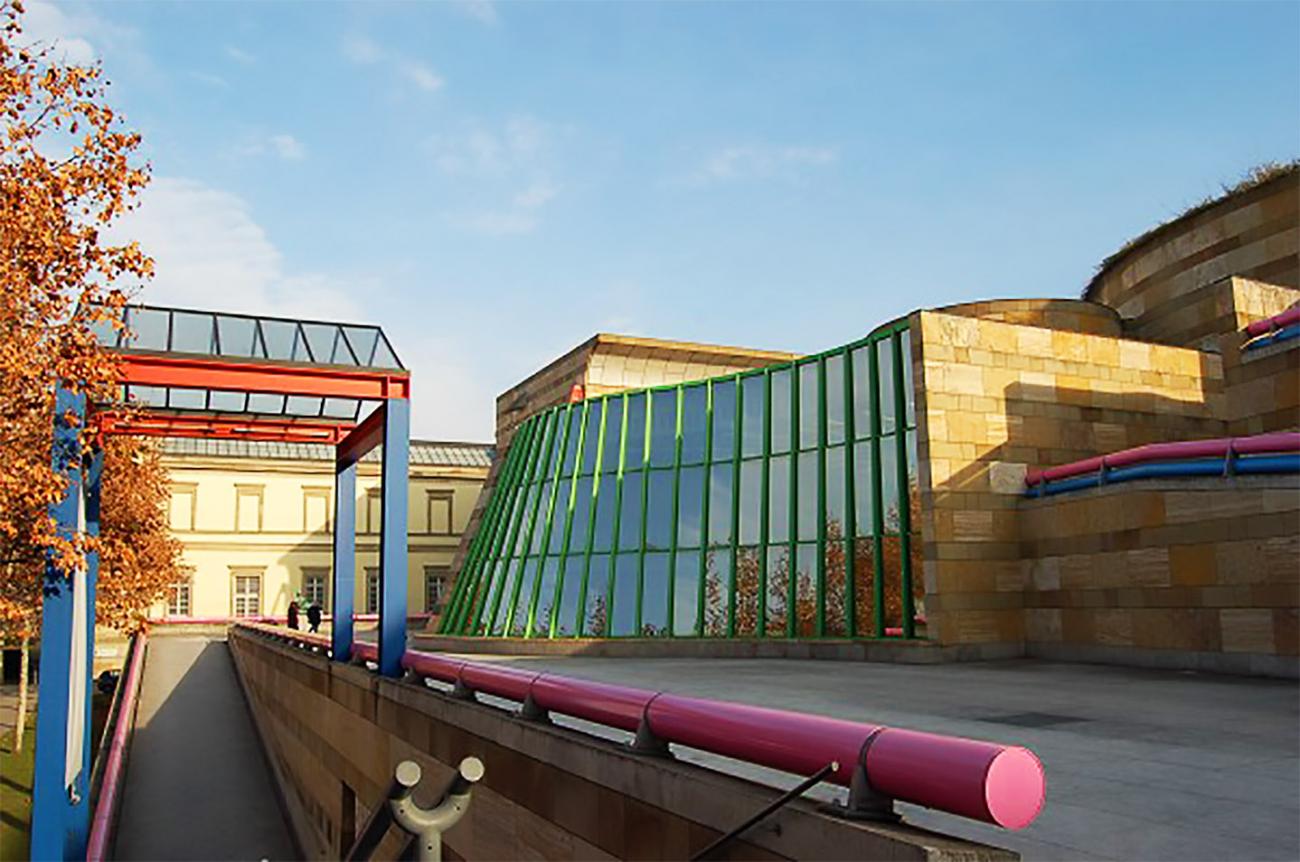 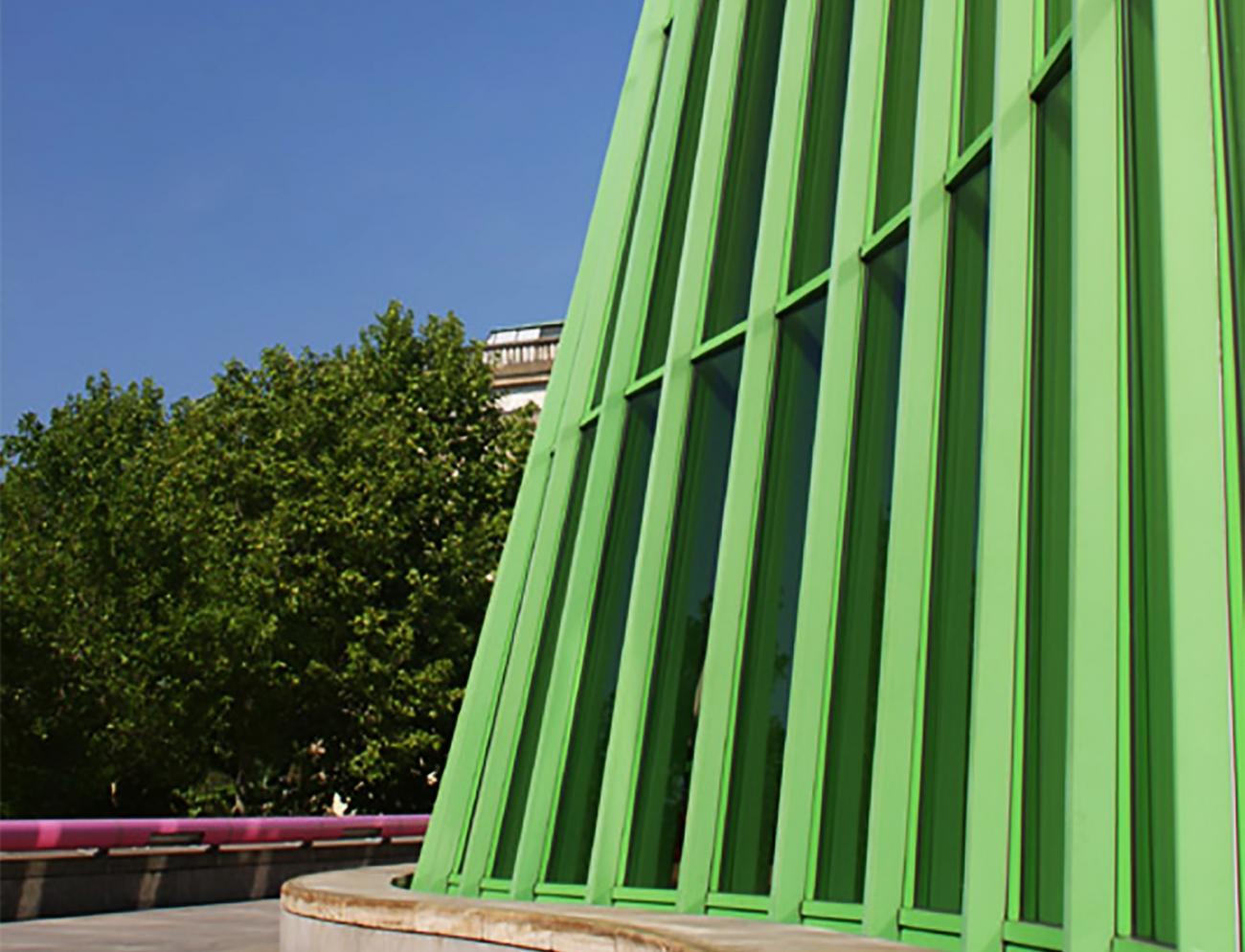 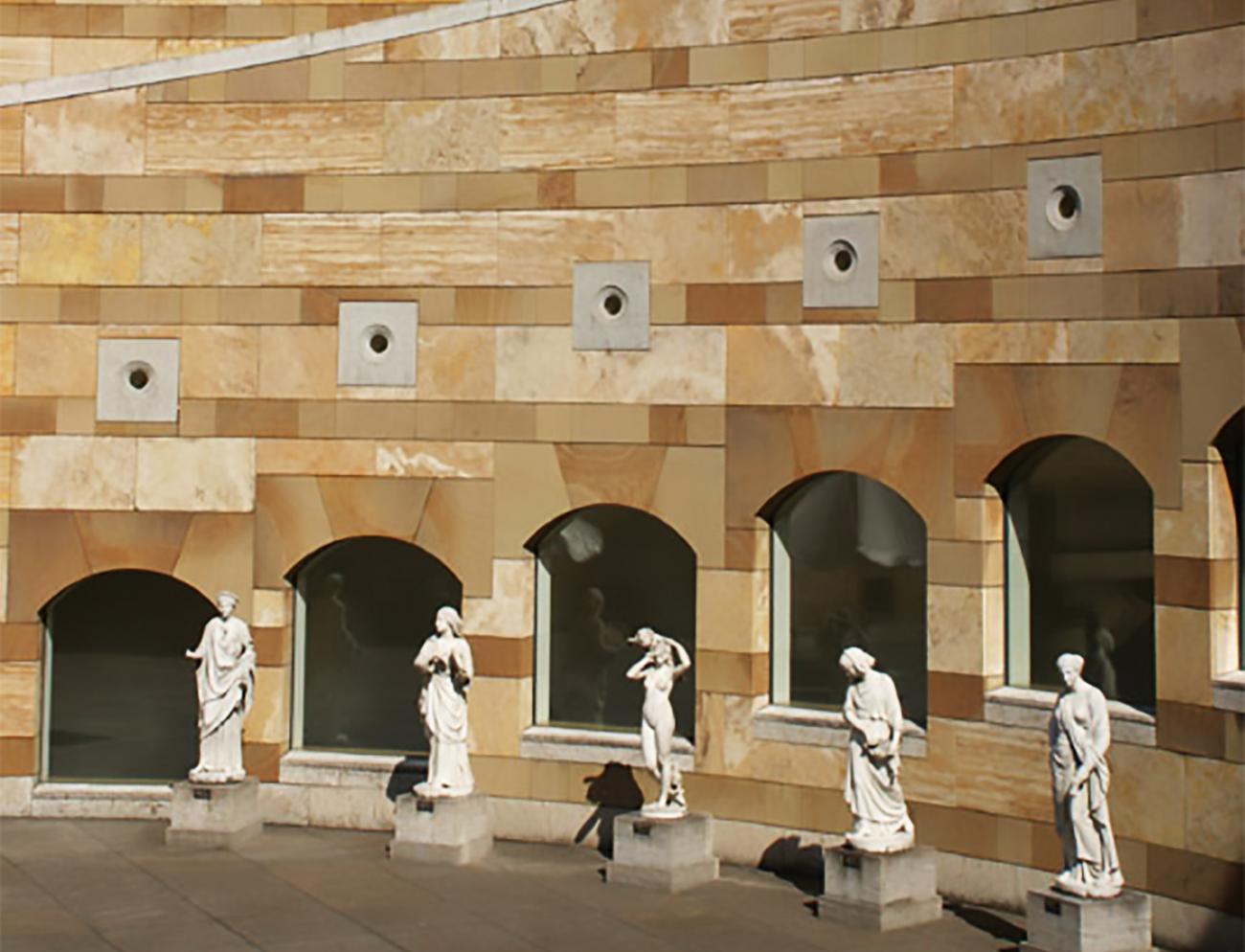 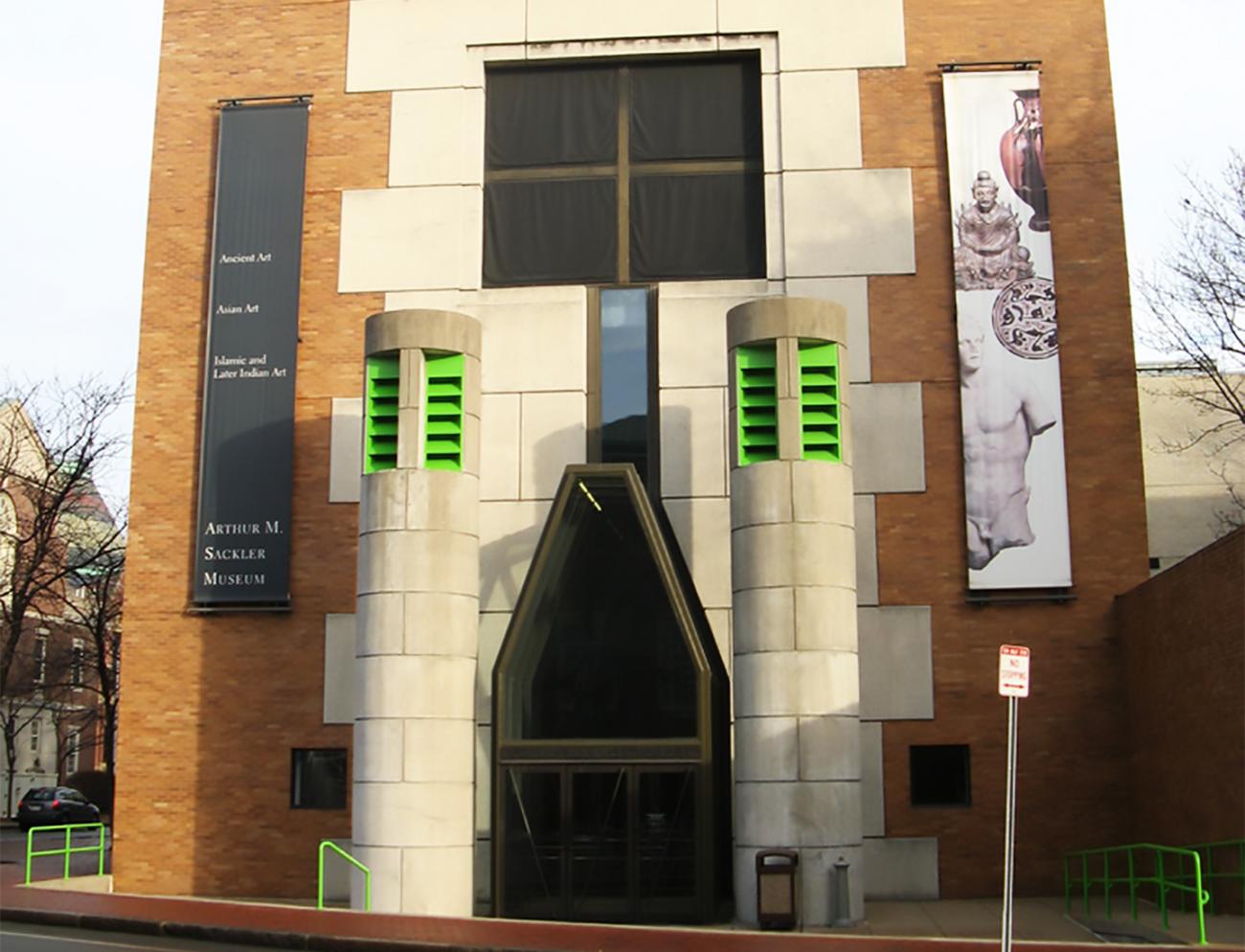 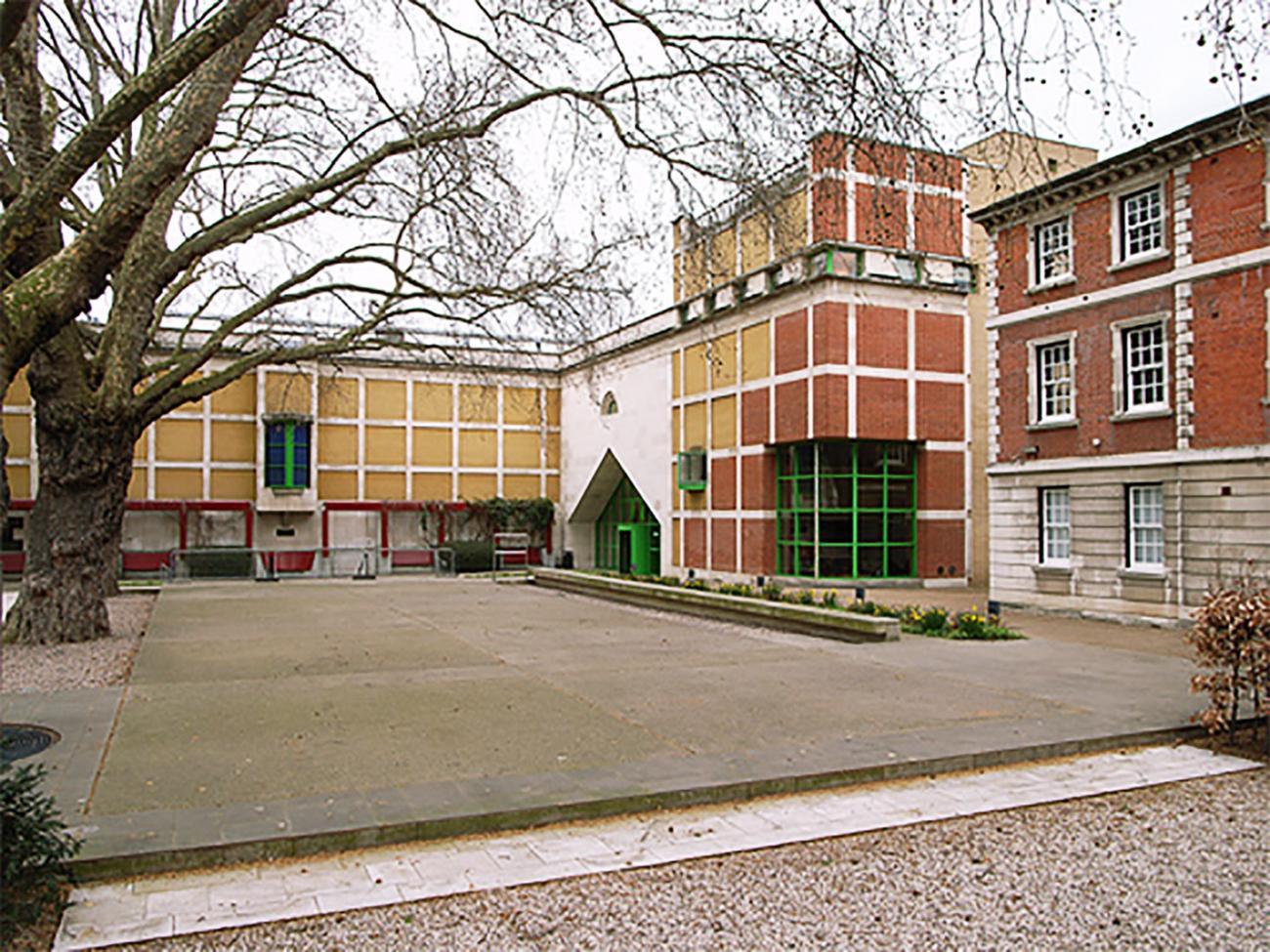 British architect James Stirling was named as the winner of the third annual international Pritzker Architecture Prize at a press conference held at New York's Museum of Modern Art. In making the announcement, Jay A. Pritzker, president of the Hyatt Foundation, which administers and funds the prize , presented the 55-year-old Stirling with a check for $100,000. The second award element, a cast of a Henry Moore sculpture created especially for the purpose, will be presented at a Washington banquet next month.

Stirling, a Scottish-born architect whose work includes museums, educational institutions and private residences, was the 1980 recipient of the Royal Gold Medal for Architecture, presented by the Royal Institute of British Architects. Among his current and upcoming projects are buildings for the Fogg Museum, Cambridge, and Columbia University, New York, as well as the new Turner Museum at London's Tate Gallery.

In a development in Fukuoka, Japan, his Nexus Housing is a project consisting of 24 individual houses, each three stories high. Koolhaas also has projects in Portugal, Korea and Germany, the latter being a new embassy for the Netherlands in Berlin, which is currently under construction.

In announcing the Prize, Mr. Pritzker quoted from a statement by 1979 Laureate Philip Johnson: "James Stirling has been the Wunderkind of modern architecture for some twenty years. Today he is a mature leader of world architecture.

"He is probably best known for a series of un built competitive projects culminating today in two great buildings actually under construction in Germany: a Museum in Stuttgart and a Scientific Institute in Berlin, and three in the United States.

"His work began at a time when the Modern Movement was still in ascendance and his variations, angles, details in the style were extraordinarily original. Today he is in the vanguard of the newer movement, which includes historic allusion and contextual consideration.

We honor James Stirling—a prodigy for so many years—as a leader of the great transition from the Modern Movement to the architecture of the New—an architecture that once more has recognized historical roots, once more has close connections with the buildings surrounding it, once more can be called a new tradition.

Originality within this tradition is Stirling's distinction: in the old "modern times," 45 degree angles in plan and section; today, startling juxtapositions and transpositions of clearly classical and nineteenth century references.

In three countries—England, Germany, and the United States—he is influencing the development of architecture through the quality of his work.

The Pritzker Architecture Prize ceremony of 1981, honoring James Stirling, was held in Washington, D.C. in the Pension Building, now the National Building Museum. The red-brick building was designed in an Italianate Renaissance Revival style in 1881 by civil engineer and U.S. Army General Montgomery C. Meigs (1816-1892) and completed in 1887. It was originally envisioned as both office space and as a monument to those who died fighting in the U.S. Civil War. In 1980 an Act of Congress designated the Pension Building as the site of a new museum celebrating American achievements in the building arts.

The interior plan of the Pension Building is dominated by a full-height hall or atrium at the center, with interconnecting rooms at the perimeter. The Great Hall measures 316 feet by 116 feet, and 159 feet tall (approximately 15 stories) at its highest point. The eight Corinthian columns of the Great Hall are among the tallest in the world at 75 feet high, 8 feet in diameter, 25 feet in circumference and crowned by a molded plaster capital and an abacus of cast iron. Each is built of 70,000 bricks.

The building is widely recognized as a marvel of engineering. An ingenious system of windows, vents, and open archways allows the Great Hall to function as a reservoir of light and air. The impressive Great Hall is used for the most important gala events, including many Presidential Inaugural Balls, from 1885 to the present day. 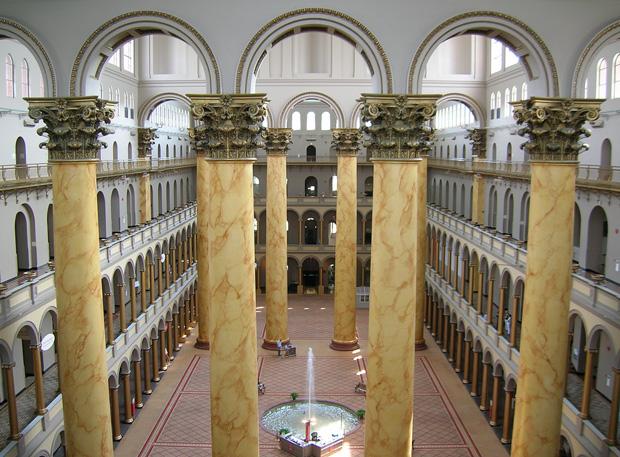 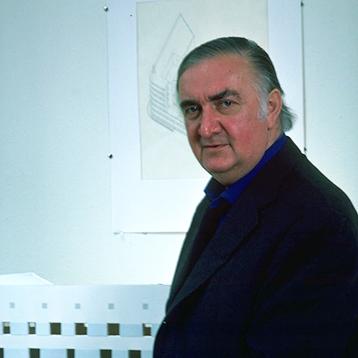 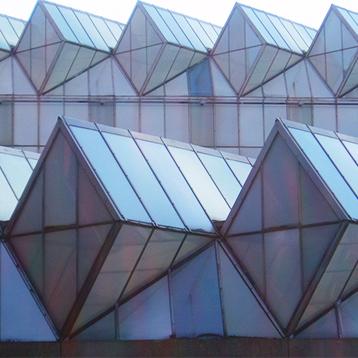 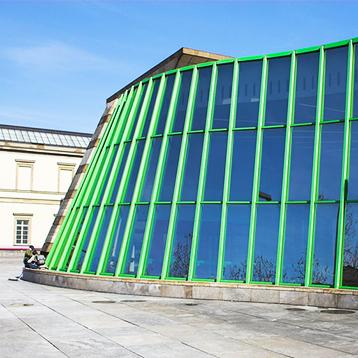 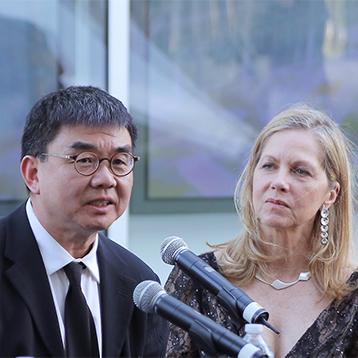 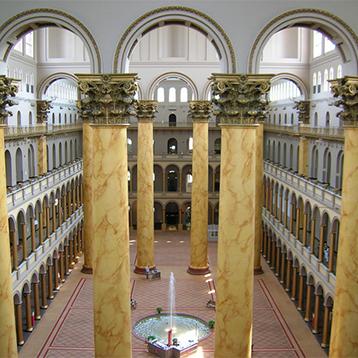 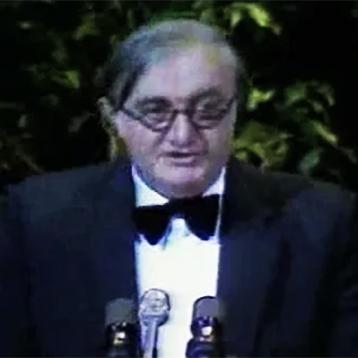